Features of the linguistic landscape are being recorded for the purpose of this project. The focus is on Montreal, but other conurbations as well as rural areas in Quebec will be considered as well. The methodology, at the data collection stage, consists of documenting elements of visual language in public space, particularly when they give insights on the hierarchy, presence, or absence of a given language. The spatial nature of this part of the project requires photographic evidence coupled with geolocation data; a GPS-enabled camera is being used for data collection. The resulting database will be searchable according to metadata including location, languages on the sign, type of sign, etc. 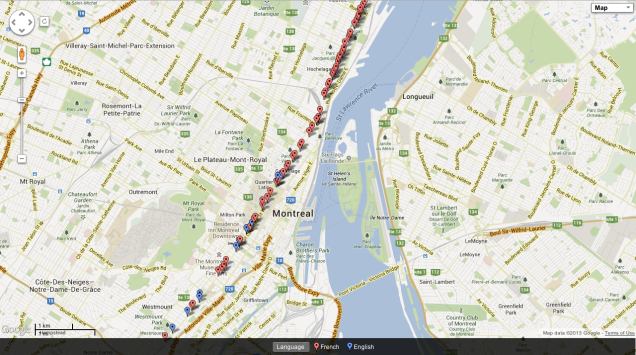 It appears from Figure 1 that there is an increase in monolingually English signs as one proceeds "from east to west" (in Montreal, "east" and "west" correspond to "downstream" and "upstream" of the Saint-Lawrence River, respectively). This is to be expected on several grounds: traditional settlement patterns have typically found more Anglophones on the west of boulevard Saint-Laurent; the City of Westmount (which starts at avenue Atwater) is officially bilingual; and the Downtown area (roughly between rue Saint-Hubert and rue Guy) features a high proportion of users of English. 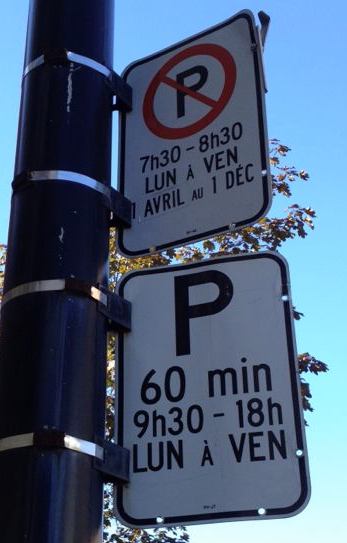 This simple observation leads to further questions as to what these signs are. All official road signs are typically French (as in Figure 2), though some bilingual ones can be found in Westmount. Others are reminiscent of an era before language legislation came into force: the name of the Dominion Square Building in Figure 3 is on a building completed in 1929. It is the headquarters of The Gazette, Montreal's main English daily newspaper, which has its English name displayed towawrds the street. The Le Body Shop sign on the same Figure 3 shows how large corporations have complied with language legislation. 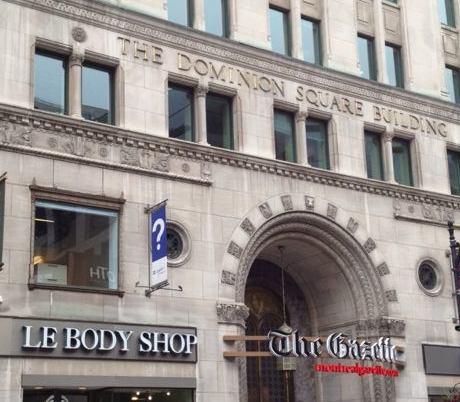